Voices Of America Features Artists at the: Stars & Stripes: Zenith Salutes The Flag! 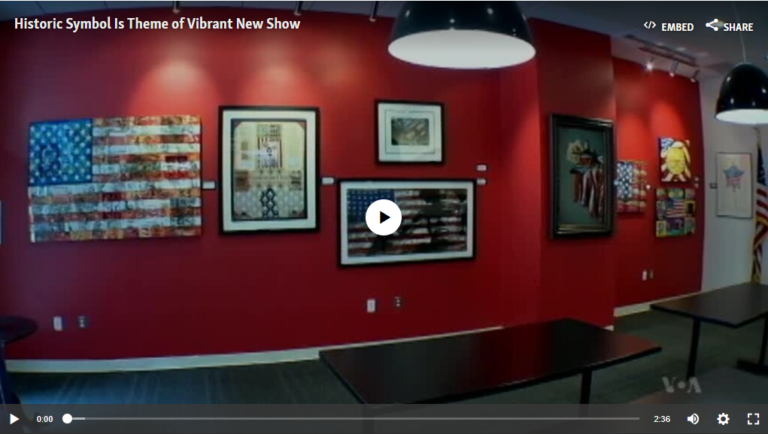 WASHINGTON — Watercolor, wooden sculptures and glowing neon … these were just a few examples among a wide and eclectic selection of artwork depicting the American flag in a new exhibit and book at the DC Chamber of Commerce in Washington.

Exhibit curator Margery Goldberg, owner of the Zenith Gallery in Washington, says “Stars & Stripes: The American Flag in Contemporary Art” features a diverse collection by artists from all across the country in a wide range of mediums.

“I really like Gavin Sewell’s work. It’s very unique, 3-dimensional mixed media,” she said. “I also like the neon ones ’cause they really glow in the dark.”

Goldberg pointed out the playful pieces as well, such as Anita Kunz’s “Mona Lisa with Flag Hat” and Keith Norval’s cast of cartoonish animal characters pictured alongside the flag.

Artist Stephanie Standish had a series of watercolors of objects decked out in stars and stripes, including “Baking Cups” and “Patriotic Star Glasses.”

“So really, every one of them has their own unique look to them and [is] hard to mistake for any of the others,” said Goldberg. 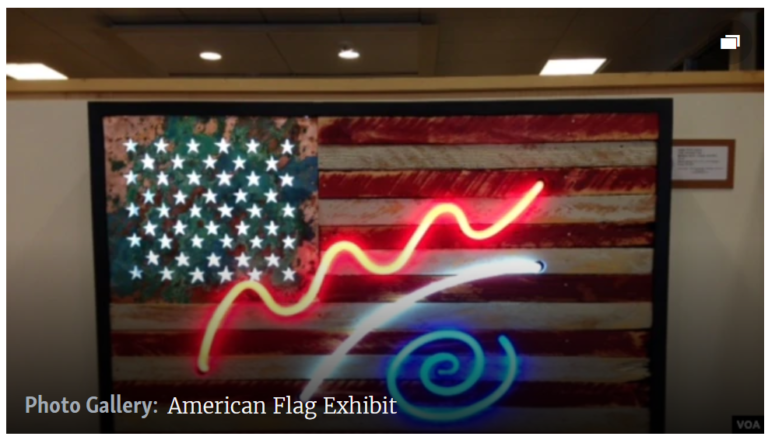 For artist Laura Taylor, a U.S. military veteran, the theme was personal.

“I’m the daughter of a Vietnam veteran, both my grandparents have served, many of my uncles and aunts have served … and it’s my way to not only represent the family but be able to give back to them as well,” she said.

Taylor works with art markers and paint to create portraits that she likes to give to fellow veterans.

“Because I’ve done so much work with different veterans, it’s very important to me and my mission to be able to give back to the veterans as they have all given to me.”

One of her pieces featured a veteran named Dennis Green.

“I photographed him sidelines as he was standing in honor of one of our fallen soldiers’ arrival home. So it was a strong moment — had a lot of meaning for the entire family and for Mr. Green.”

“Sam’s Boots” by artist Katharine Owens is a mixed-media creation that has special meaning for her.

“My neighbor Sam and his wife, Nicole, were both Iraq vets, and he was an Afghan vet. I asked him if I could do an artwork of his boots and he agreed to that. …Then when he came over to the house to see it in progress, he was able to run his hand over the toes of the boots and he looked at me and he said, ‘Katharine, that is exactly the way my boots felt when I was in Iraq and had that very, very fine sand all over my boots. …’

“Even today … a couple of years later, it gives me the shivers and brings tears to my eyes every time I tell the story,” she explained.

While nostalgia and patriotism were common themes in the exhibit, visitor Steven Shore pointed out that there were also images that represented some of America’s darker moments.

He gestured to a quilt painting by Curtis Woody that depicts words and images related to slavery.

“It’s a delicate balance of highlighting what is best in America … American ideals, and yet artists should feel perfectly free to express those times in our history where we’ve fallen short of those ideals.”

But for Chamber of Commerce President Harry Wingo, it was all good.

“Whenever I look at an American flag, I still get a chill,” he said.

“I think it should make people feel good,” echoed Margery Goldberg. “America’s a great place, and we’re all blessed to be here.”